The Time in Idaho 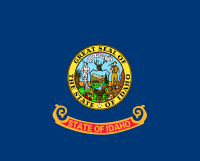 What time is it in Idaho? This is a commonly asked question — but this question requires a question in return — where in Idaho?

A larger portion of Idaho is in the Mountain Time Zone.

Keep reading to learn more about time zones in Idaho.

What Time Is It In Idaho? There Are 2 Time Zones

The 9 counties in Idaho that are in the Pacific Time Zone are: Benewah, Bonner, Boundary, Clearwater, Kootenai, Latah, Lewis, Nez Perce and Shoshone.

→ Learn more about the counties in Idaho

Economically, the northern part of Idaho is tied to Washington State which uses the Pacific Time Zone.

The 2 Time Zones in Idaho

Information about the time zones in Idaho.

Did You Know — Idaho Has A Time Zone Bridge?

Geographically, Riggins is located at the meeting place of the Salmon and Little Salmon Rivers.

Did You Also Know — You Might Change Time Zones Going From Idaho to British Columbia?

What's interesting is although Eastport observes daylight saving time, Kingsgate does not. As a result, the following happens:

→ From the first Sunday in November until the second Sunday in March, Eastport is GMT -8 while Kingsgate is GMT -7. This means there is a 1 hour time difference. So, as an example, when it is 1 PM in Eastport, it is 2 PM in Kingsgate.

→ From the second Sunday in March until the first Sunday in November, both Eastport and Kingsgate are GMT -7. This means there no time difference.

This time zones mismatch also applies to Creston and Yakh, both located approximately 10 to 15 kilomters from the Kingsgate. But once you leave this general area, depending on which way you travel, the time zones can potentially change again as British Columbia, similar to Idaho, has multiple time zones.

All of Idaho observes daylight saving.

→ At 2 AM local time, clocks are advanced 1 hour on the second Sunday in March.

→ At 2 AM local time, clocks go back 1 hour on the first Sunday in November.

By using the following time zone chart you can see the time differences between the 4 main time zones in the United States including the Pacific Time Zone (Northern Idaho) and the Mountain Time Zone (Southern Idaho).