The Time in Antarctica

Antarctica has numerous time zones since each country that operates a research station can choose a time zone of their choice.

Based on careful research, Time Genie provides you with the current time and date at 44 research stations in Antarctica.

A short documentary about Shackleton and one of the greatest stories of survival.

The South Pole and >Antarctica — How A Time Zone is Chosen

Time zones are, in theory, divided along lines of longitude. Every 15 degrees of longitude is considered another time zone. In Antarctica, choosing a time zone based on every 15 degrees of longitude does not make sense. In fact, almost any time zone can be chosen in Antarctica. Why? During the Antarctic winter, there is 24 hours of darkness. During the Antarctic summer, there is 24 hours of daylight. There is but a short time each year where there is actually a noticeable difference between day and night. 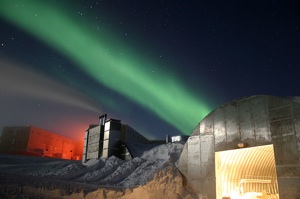 Although any time could be chosen at Amundsen–Scott South Pole Station and although this base is maintained by the USA, this base chooses to use the same time as Christchurch, New Zealand since most flights to the South Pole leave from Christchurch. Thus, for practical reasons, the time at the South Pole (Amundsen–Scott) is the same time zone as New Zealand. This helps create harmony between flights, communications, etc.

With the above realizations, the question still remains — How are time zones chosen at the numerous research stations in Antarctica?

Research stations that use the same time as Argentina include:

The Australian Antarctic Division states that Mawson Station is in the GMT +5 time zone. Zhongshan Station, due to its relative closeness to Mawson Station, uses the same time.

Casey Station is in the GMT +8 time zone which is the same time as in Perth, Australia.

Davis Station is in the GMT +7 time zone.

Research stations that use the same time as Chile include:

Research stations that use the same time as European Central Time (UTC/GMT +1) include:

Research stations that use the same time as European Central Summer Time (UTC/GMT +2) include:

Research stations that use the same time as Greenwich Mean Time (GMT) include:

Research stations that use the same time as New Zealand include:

Mirny Station and Vostok Station choose to use the same time as Yekaterinburg, Russia.

Airports — or more appropriately airfields — in Antarctica tend to follow the same time zone as the research stations they serve and/or the location the airplanes depart from.

Argentinian Antarctica (in Spanish, Antártida Argentina) is a sector of Antarctica which Argentina considers part of its National Territory. The Argentine Antarctic region, consisting of the Antarctic Peninsula and a triangular section extending to the South Pole, is delimited by the meridians 25º West and 74º West and the parallel 60º South latitude. Administratively, Argentine Antarctica is a department of the province of Tierra del Fuego, Antarctica, and South Atlantic Islands. The provincial authorities reside in Ushuaia and the Governor annually designates his delegate for the Antarctica region, which thus represents the civil power of the zone.

Information about Australian research stations can be found at the Australian Antarctic Division official web site.

According to the Chilean Hydrographic and Oceanographic Service (SHOA), an agency of the Chilean Navy and the agency that is the lawful keeper of time in Chile, the Chilean Antarctic Territory is UTC/GMT -4 during standard time and UTC/GMT -3 during daylight saving time.

The daylight saving time in Chile is often unpredictable and subject to change.

On August 17, 2005, Time Genie received an email from Finnish Antarctic Research Program (FINNARP) informing us that the Aboa, the Finnish research station, uses Greenwich Meantime. The reason for this is due to the fact that Aboa is located only 13 degrees longitude from the Greenwich Meridian Line of 0 degrees longitude. Aboa is not occupied during the winter months.

According to GAWSIS Station Information System, Neumayer Station is UTC/GMT +1.

On December 27, 2005, Time Genie received a reply from a Radio Amateur (DJ7BA) confirming that both Maitri Station (India) and Novolazarevskaya Station (Russia), which are located only 4.5 km from each other, both use UTC/GMT throughout the year.

On December 29, 2005, Time Genie received a reply from a Radio Amateur (DJ7BA) who had just made radio contact with a person at Terra Nova Bay. When asked what the current time was at the research station, the individual mentioned they used to the same time as New Zealand.

On August 15, 2005, Time Genie received official confirmation from Antarctica New Zealand that Scott Base is in the exact same time zone as New Zealand in all respects, including daylight saving time.

Tor Research Station and Troll Station have slightly confusing time zone rules. Both research stations actually use 3 time zones throughout the year and in some ways, their switch between standard time and daylight saving time is in reverse.

With Tor Research Station and Troll Station, during the Antarctic summer (approximately November to March), Greenwich Mean Time (GMT) is the time zone used. But, once the summer season ends and the crew is left alone, usually around the last week of February to the first week of March, both stations begin using the same time zone as Norway.

Once Tor Research Station amd Troll Station begin using the same time zone as Norway, there is a brief period from approximately the beginning of March until the last Sunday in March in which both stations use European Central Time (UTC/GMT +1).

From the last Sunday in October until flights begin operating again in Antarctica, Tor Research Station and Troll Station use European Central Time (UTC/GMT +1). This time zone may only be used for about 7 to 14 days because once the flights start, Tor Research Station and Troll Station revert back to the using Greenwich Mean Time (GMT) until approximately the beginning of March when the cycle repearts itself.

Why do Tor Research Station and Troll Station do this? Simply put, during the Antarctic Summer, Greenwich Mean Time (GMT) is used to co–ordinate with the locations from which supplies are coming from. During the Antarctic winter, the same time as Norway is used for easier communication with others in Norway.

Tor Research Station and Troll Station are the only locations that Time Genie knows of that use 3 time zones.

Although Tor Research Station and Troll Station officially uses 3 time zones, it is simply not possible to know exactly when Greenwich Mean Time (GMT) and European Central Time (UTC/GMT +1) will start because the dates vary from year to year, depending on the weather and other conditions.

Without knowing the exact dates, Time Genie has chosen to simplify the time zone rules for Tor Research Station and Troll Station based on information and input received from the staff at the Norwegian Polar Institute:

On December 27, 2005, Time Genie received a reply from a Radio Amateur (DJ7BA) confirming that both Maitri Station (India) and Novolazarevskaya Station (Russia), which are located only 4.5 km from each other, both use UTC/GMT throughout the year.

Halley Scientific Research Base does not observe a traditional daylight saving time. Instead, this research base changes from UTC/GMT 0 to UTC/GMT -3 in late November or early December of each year. The time changes to UTC/GMT -3 around the time that the first plane arrives via Rothera Scientific Research Base which is located on Adelaide Island in the Bellingshausen Sea. This allows Halley to be in harmony with time at Rothera.

When the last plane leaves Halley Scientific Research Base, the time goes back to UTC/GMT 0. This happens normally around April, if not sooner. It is difficult to say exactly when the time changes at Halley as it all depends on weather.

Airstrips such as Port Lockroy, Fossil Bay, and Sky Blu operate on the same time as Rothera.

More information about the Heroic Age of Antarctic Exploration can be found at Wikipedia.

Time Genie offers the following pictures to salute those famous and those unknown who explored Antarctica during the Heroic Age of Antarctic Exploration.

Of the explorers, Time Genie personally likes Ernest Shackleton whose advertisement to obtain a crew for his expedition read:

For a more modern movie about Antarctica, based on a true story, Time Genie suggests watching Eight Below.