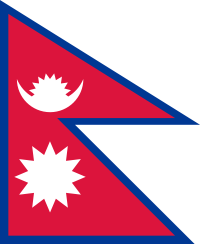 There are significant differences between the Gregorian Calendar and the Nepali Calendar. Some of these differences are:

To maintain clarity, Time Genie provides this Nepali Calendar in Nepalese. However, you can move your mouse over any word to see the English translation.

All official holidays are marked in red.

Time Genie updates this calendar once per year at the start of the New Year which is on or around April 14.

Each lunar day in known as a tithi. A lunar day occurs when the longitudal angle between the moon and sun increases by 12°.

Since a lunar day begins when there is a 12° increase, the actual time a new day begins and ends can vary. A lunar day can last from 19 to 26 hours. This is, again why, there can be 2 days in a row with the same name.

There are 30 tithis in each lunar month.

There are numerous holidays in Nepal. Some holidays are specific to certain groups such as women only or to specific areas such as Kathmandu.

All known official holidays are marked in red. This includes all Saturdays since there is a 6 day work week in Nepal with Saturday being the official day off.